In the final month before the seismic changes introduced by the whiplash reforms, claims numbers in the existing Claims Portal showed no significant increase from the months prior.

Following confirmation that only those claims occurring on or after 31 May 2021 would be caught by the reforms, an expected surge in RTA Claims Notification Forms ("CNFs") did not materialise. This was not surprising, as those claims arising from incidents occurring pre-31 May 2021 will continue to benefit from the established system consequential to the Claims Portal with higher whiplash damages and recoverable costs.

As seen below, the RTA claims figures for May showed a slight increase on the figures from April suggesting that figures have stabilised following the latest stage of the roadmap to ease lockdown. 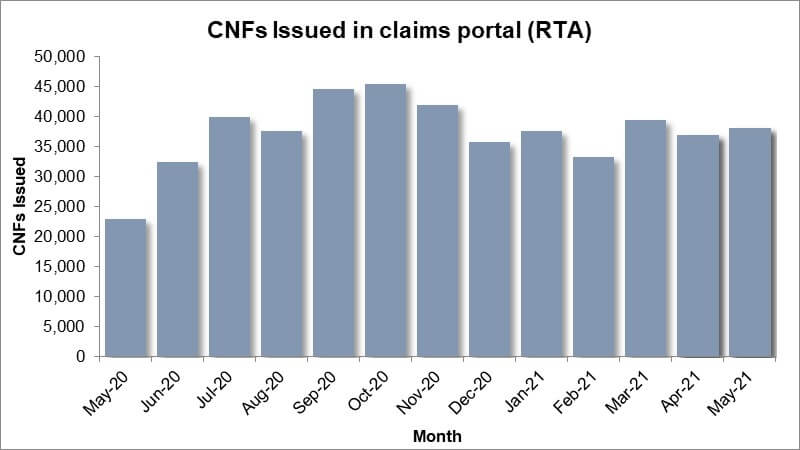 The most recent Civil Justice Statistics, covering January to March (Q1) 2021 have recently been released.  When compared to the same period last year – the last pre-pandemic quarter – there has been a marked increase in the time taken for both small and fast/multi-track claims to reach a final hearing (from date of issue).

Of particular interest are the statistics relating to small claims hearings. Following the introduction of liability-only hearings for claims within the OICP where liability is denied in full, and an expected increase in unrepresented litigants, there may be an increase in small claims litigation.

To date, there has been no confirmation of an expedited process allowing courts to deal with claims arising out of the OICP. Therefore, it is not unreasonable to hypothesise that claims were liability is denied in the OICP, may take up to a year to reach a hearing.  As medical evidence will not be obtained in OICP claims where liability is denied, until that liability issue is resolved, this raises questions around the prognosis for injuries attached to these claims.