The Master of Rolls has confirmed his acceptance of the proposals contained within the recent Civil Justice Council report on the Guideline Hourly Rates.

The full Civil Justice Council report can be accessed here.

The recommendations will be implemented, with the expectation that the new guide will be used from 1 October 2021.  The Master of the Rolls did acknowledge the concerns of those who raised the impact of an increased culture of working from home and its potential impact upon overheads.  This was not considered within the report and was not held to be something that “should delay the necessary update of what is ultimately an advisory guide.”

However, a review of GHR reporting will now be undertaken within 2 years, as opposed to 3 years as proposed by the CJC report.  Paying parties may look to again argue at that stage that remote working has lowered solicitors' overheads and use that as a tool to stave off such further increases, inflationary or otherwise, or seek decreases where appropriate.

The GHRs as recommended in the Interim Report shown below will now be implemented in full: 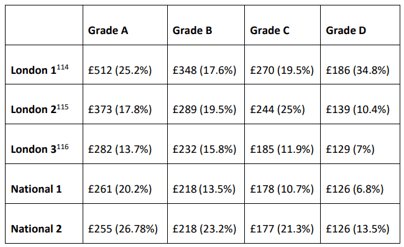 The % figure reflects the increase on the 2010 GHR.

In the Interim Report it was decided to seek evidence on “what was in fact allowed by Costs Judges who have experience and expertise in reflecting what is reasonable and proportionate.” In addition, evidence was sought from members of the profession. The report states that a “number of responses agreed with the methodology” used in the Interim Report with one saying it is “a welcome relief that this consultation is based on information largely collated from experienced Costs Judges and the profession.”

Others averred that the sample size was inadequate to provide a proper cross-representation of each respective claim and value.

In their responses paying parties “severely criticised the methodology” stating it should be “extensively revisited on the basis of more accurate information and a closer appreciation of the developing realities of commercial practice”, and submitted that no increase in GHRs was justified, if anything they should be reduced.

FOIL submitted that the dataset upon which the analysis had been based was very small stating that the number of personal injury, clinical negligence, Court of Protection and abuse claims that had been included was “tiny compared to the volume of litigation in these areas and almost certain to be unrepresentative.”

The working group concluded that though the methodology was capable of “some valid criticism” it is the best available in the circumstances and recommended the Civil Justice Council “accept that the methodology used in the Interim Report is a sufficiently sound basis upon which revised Guideline Hourly Rates should be based.”

In the Interim Report it was recommended that London 1 be defined by nature of work rather than geographical location. London 1 would be primarily for very heavy commercial and corporate work, and London 2 would be for all other work carried out by firms geographically located in either the City of London or the area at present covered by London 2. There had been no real opposition to this and the working group recommends that the changes to London 1 and 2 should be adopted.

The working party confirmed that those who supported the methodology of the Interim Report were generally supportive of the recommended GHRs with the majority who criticised the rates being expected i.e. receiving parties who thought they were too low, and paying parties thinking them too high.

There was a suggestion from the Council of HM Circuit Judges that GHRs should be rounded to the nearest £10, or if not £5, as working in 6 minute units means the hourly rate should be easily divisible by 10. However, this was discounted as the consultation had not been requested on this point, and there were “concerns that even the small changes introduced by rounding might have a serious and disproportionate effect in some areas, perhaps particularly on the insurance industry.”

The working group is keen to emphasise that the GHRs are guideline rates and there is nothing to prevent a judge awarding a higher rate to a fee earner in a particular case. The existing practice that a complex case where a fee earner bears a particularly heavy responsibility, will continue to attract an increase on GHR, if an assessing judge considers appropriate.

Conversely, there is nothing which prevents a Judge from allowing a lower than GHR rate if a case is particularly straightforward.

Other recommendations include the express inclusion as a grade A fee earner of Fellows of CILEX with 8 years' post qualification experience; the replacement of the words 'legal executives' with 'Fellows of CILEX' in the grade B and C categories of fee earners and that the litigant in person rate of £19 should be reviewed, having not changed since March 2015.

There is no suggestion in the report that the Provisional Assessment cap of £1,500 plus VAT and Court fee should be modified.

Within the Interim Report it was proposed to abolish National Band 3 and merge it into National Band 2. None of the respondents were in favour of keeping National Band 3. The final report recommends that this be implemented, with discussion that in future a one national band may be considered.

In relation to the N260, it was suggested that the location of the fee earners carrying out the work should be specified. This is to avoid central London firms charging London rates when work is carried out in regional or outsourced offices, thereby increasing costs to insurance companies. The working group described a number “of very positive responses to the recommendation” with the final report requesting that the Civil Procedure Rule Committee consider whether: (a) the N260 should require the receiving party to specify the location (the office to which the fee earner is predominantly attached) and (b) replace in the ‘description of fee earners’ section, the word ‘grade’ with ‘GHR grade’.

There was concern expressed about the new rates being applied retrospectively.

The working group stated it does not recommend that any guidance limiting the retrospective effect be given stating that “the new rates (if approved) should be used on summary assessments which are carried out after the date of approval.” However, costs assessed after the date will include all costs in a bill whether before or after the date of implementation leading to potentially increased costs for insurers. Rates claimed can and will need to be continued to be challenged at detailed assessment hearings.