Real teeth or all bark and no bite? - Consultation on the Office for Environmental Protection’s draft enforcement policy

The Office for Environmental Protection (“OEP”) has issued its draft enforcement policy for consultation which gives us the first indication of its enforcement muscles and how it intends to flex them.

Whilst the OEP is designed to hold public bodies to account where there are serious failings in complying with environmental law, companies will no doubt be keen to understand whether the OEP’s draft enforcement policy provides a potential route of challenge for business regarding the conduct of the EA and local authorities.

The window for responding to the consultation closes on 22 March 2022.

What are the OEP’s powers?

What is clear from the OEP’s draft enforcement policy is that it has a range of investigatory and enforcement powers which include:

The below chart sets out the OEP’s decision making framework which involves three steps. This will be applied to determine whether and how the OEP exercises its enforcement functions. 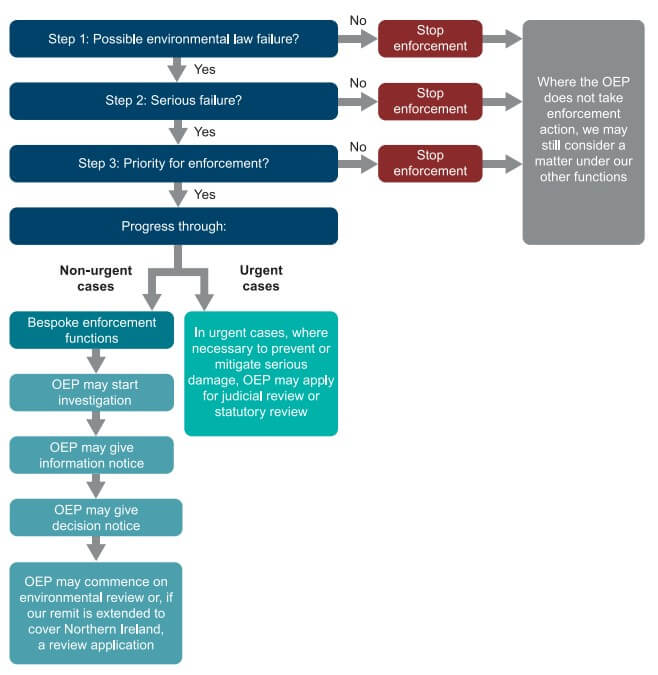 What does the OEP class as a serious failing?

In deciding whether any failure is serious, the OEP will take the following into account:

Of note, the draft policy states that the OEP’s enforcement function should be complementary to other relevant statutory regimes and to the work of others charged with overseeing public authorities in relation to environmental matters.  Such regimes include public authorities’ complaints procedures, appeal mechanisms and legal challenges as well the functions of the relevant ombudsman service.  Accordingly, to avoid conflict and duplication, the OEP will take into account the existence of such regimes and will not normally commence enforcement action where it judges another regime or authority is better suited to hold a public authority to account.

What potential opportunities does this present for businesses?

Given the OEP’s stated intention to avoid overlap with existing regimes, opportunities for businesses to challenge the conduct of public authorities to the OEP seem limited at first blush.

However, where a public authority’s conduct/intervention with another business is causing harm to the environment or human health, or capable of causing such harm, and this is putting other businesses at a commercial disadvantage, it might be worth reporting this to the OEP to see if it has any appetite to deploy its investigatory and enforcement powers.