Notwithstanding that continuous cover is one of the most important, but controversial, areas of Australian insurance law, there has been very little judicial authority on the issue. That is why the recent decision in CIMIC Group Ltd v AIG Group Ltd & Ors[1] is important in determining the meaning and effect of continuous cover clauses, particularly in the context of multi‑layer insurance with different layers and different insurers on different policy years.

The decision also determines how continuous cover operates in conjunction with an insured's duty of disclosure and whether the equitable right of contribution[2] is available between insurers on different years. Overall, we consider that Justice Peden made the right determinations, but not necessarily for the right reasons.

Continuous cover operates when an insured knew of relevant circumstances[3] in one policy period and yet only notifies that circumstance or resultant claim in a subsequent policy year. Even if the insured had the same insurer across those years, it could still be uninsured for the claim, with no cover under the year the circumstance was first known (because no notification was made to that policy)[4] and be excluded from cover under the policy in which notification is eventually made, by reason of a prior known circumstance exclusion.

The vice which the continuous cover clause seeks to address is the insured's failure to notify a circumstance when first known, which precludes it from cover when subsequently notified. The underwriting intent being that if the insured was continuously insured over that period, it would not fall between policies, and the later policy would provide continuous cover, but subject to the same terms, conditions, exclusions, limitations of the policy under which notification should have first been made. In other words, the insured should get the same cover under the later policy[5] which it would have got if proper notification had occurred.

"Notwithstanding exclusion 3.2 (Prior Claims and Circumstances), cover is provided under this policy for any claim, or circumstance, which could or should have been notified under any earlier policy, provided always:

(i)       the Claim or Circumstance, could and should have been notified after the Continuity Date; and

(ii)      the Claim should be dealt with in accordance with all the terms, conditions, exclusions and limitations of the Policy under which the Claim, or Circumstance, could and should have been notified."(our emphasis).

The critical issue in the court’s determination of the Clause was the meaning of the term "limitations", and whether that meant the limit of liability of the first policy, which in this case had been eroded[6], or the uneroded limit[7]. The matter was further complicated because the relevant insurance towers for the two years were not the same. You will see below that in 2010/11 the $20 million primary policy of AIG and first excess of $20 million of Chubb became a combined $30 million primary with AIG/Chubb (50/50) for the 2011/12 year.[8] 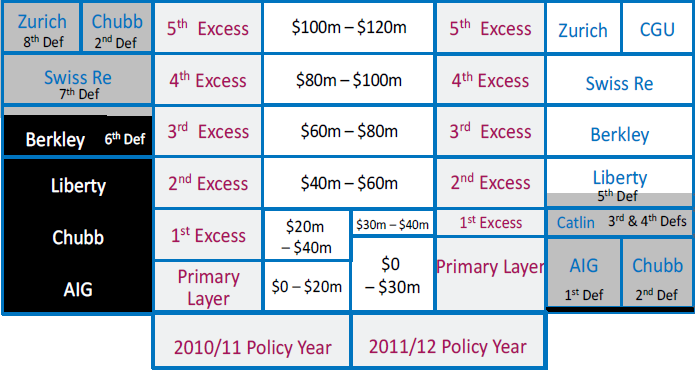 Prior to determining the operation of the continuous cover clause, the Court first had to determine whether there was any prior knowledge of relevant circumstances, being the subject matter of a shareholder class action against CIMIC regarding, its failure to disclose known bribery concerns with its Middle Eastern operation, which was also the subject of regulatory investigations and prosecutions.

The relevant facts of the case were:

Denial of Indemnity by relevant 2011 insurers

(1)      the File Note referencing bribery issues equated to circumstances that may give rise to a claim which ought to have been notified to the 2010/11 policy, and therefore only fell for cover under the 2011/12 year by reason of the continuous cover clause;

(2)      the term “limitations” in the continuous cover clause meant the eroded limit of liability of the 2010/11 year, and their limits were entirely eroded;

(3)      alternatively, there had been non-disclosure of those circumstances and misrepresentation of the Leighton risk to the 2011/12 insures which entitled them to reduce their liability to nil pursuant to section 28(3) of the Insurance Contracts Act (Cth) (ICA); and

(4)      If AIG was liable for any payments under the 2011/12 policy, it was entitled to claim contribution from the 2010/11 insurers – by way of double insurance, on the basis that there were two policies applying to the same loss.

CIMIC's position was relevantly that:

The Court held that:

Our comments on the judgment:

[3] Although some continuous cover clauses also refer to claims – which is not required and which we recommend be removed (see below).

[5] Subject to its limit of liability

[6] So as to give the insured the same cover it would have got under the earlier policy.

[7] Which would provide the insured with a new limit of cover.

[8] This meant that if it was the uneroded limit of $40 million how did that translate to the second year.

[9] Then known as Leighton.

[14] AXA XL also had a rectification argument regarding its stated Continuity Date.

[15] i.e this last point is important as continuous cover cannot turn the $30m 2011/12 primary policy into a $40m policy. Further, it means that if an Insured has two claims afoot over the two years, the availability of cover should not be determined by which settles first.

[16] Which provided that knowledge of Leighton was limited to that of certain officers, such as the CEO, CFO, COO and CLO.

[17] As those contractual provisions only came into existence after the disclosures and representations had been made and relied on.

[19] Which allows an insurer to reduce its liability to the extent of any prejudice suffered by the non‑disclosure or misrepresentation.

[20] It would only apply if the insurer would have still offered the insurance on the same terms, if correct disclosure/representation had occurred. Continuous cover is the major commercial benefit to an existing insurer which can differentiate it from other insurers.

[21] ie by referencing “in the absence of fraudulent non-disclosure… relevant continuous cover is provided”.

[22] Our view is that it should not as it could turn the policy from a Claims first made and notified policy into a claims notified policy. An Insured has the right to late notify a Claim in any event East End v CE Head (1991) 25 NSWLR400.