Modern slavery – an update on the regulatory environment and reporting trends

Governments, investors, employees, and other stakeholders are increasingly focused on corporate efforts to combat modern slavery in supply chains. The 2020 modern slavery reporting season has shown us that it is not sufficient to treat this issue as a “tick-box exercise” but rather, it requires a commitment to carry out due diligence across the supply chain, ongoing scrutiny of supplier activities and training to raise awareness across areas of a business.

In this update we provide an overview of the current regulatory requirements and our insights into trends we have identified from modern slavery statements published to date.

As set out in our previous update [COVID-19 Australia: The importance of addressing modern slavery in reviewing your supply chains], the Commonwealth Modern Slavery Act 2018 (Cth) (MSA)(1) requires Australian entities or businesses with Australian operations with a minimum annual consolidated revenue of $100 million (Revenue Threshold) to submit a modern slavery statement.

The modern slavery statement must set out the modern slavery risks faced by the business in its operations and supply chains, and detail what steps it is taking to mitigate these risks. At first blush this may sound simple, however, most businesses that exceed the Revenue Threshold have hundreds of suppliers, and complex operations across different product lines and countries.

In light of COVID-19, the Department of Home Affairs announced an extension of the original deadlines for reporting following the 2020 end of financial year, with those companies following the Australian financial year required to submit their first statement by 31 March 2021.

Under the MSA, if an entity fails to submit a modern slavery statement within the reporting period, the Minister has the power to issue a written request to that entity. Although the failure to respond to this written request does not attract a penalty, the Minister can “name and shame” the entity and provide details of the non-compliance to the general public.

It is important to note that once a modern slavery statement is submitted to the Australian Border Force (ABF), it will become publicly available on the ABF’s online register. Entities should keep this in mind when drafting a modern slavery statement and also be aware that over consecutive reporting seasons, stakeholders will be able to assess the level of progress your organisation is making on this issue.

Do you need to submit a modern slavery statement?

If you haven’t published your modern slavery statement yet, or if you expect to exceed the Revenue Threshold in your next financial year, you can undertake our self-assessment questionnaire which will tell you whether you need to publish a statement and the date your statement is due.

Despite the difficulties faced by the global pandemic, entities performed quite well in meeting their reporting obligations under the MSA in FY2020. Following the first season of Modern Slavery Statements, the ABF register records that, to date:

Entities who have published a modern slavery statement to date are headquartered across 40 countries. Most statements have come from entities headquartered in Australia (2052 entities), the United States (167 entities), United Kingdom (64 entities), New Zealand (41 entities) and Japan (38 entities).(1) While the law is targeted at Australian business, these figures demonstrate how international corporations can be subject to a variety of different regulatory regimes around the world.

In addition to the international spread of entities, we have also identified the key industries that make up the reporting population.

Out of the statements lodged, the key industry sectors in which the reporting entities operate are:

It is important to recognise that high representation across particular sectors does not necessarily reflect the prevalence of modern slavery risk within a sector, but rather that a large number of companies in that sector meet the Revenue Threshold. 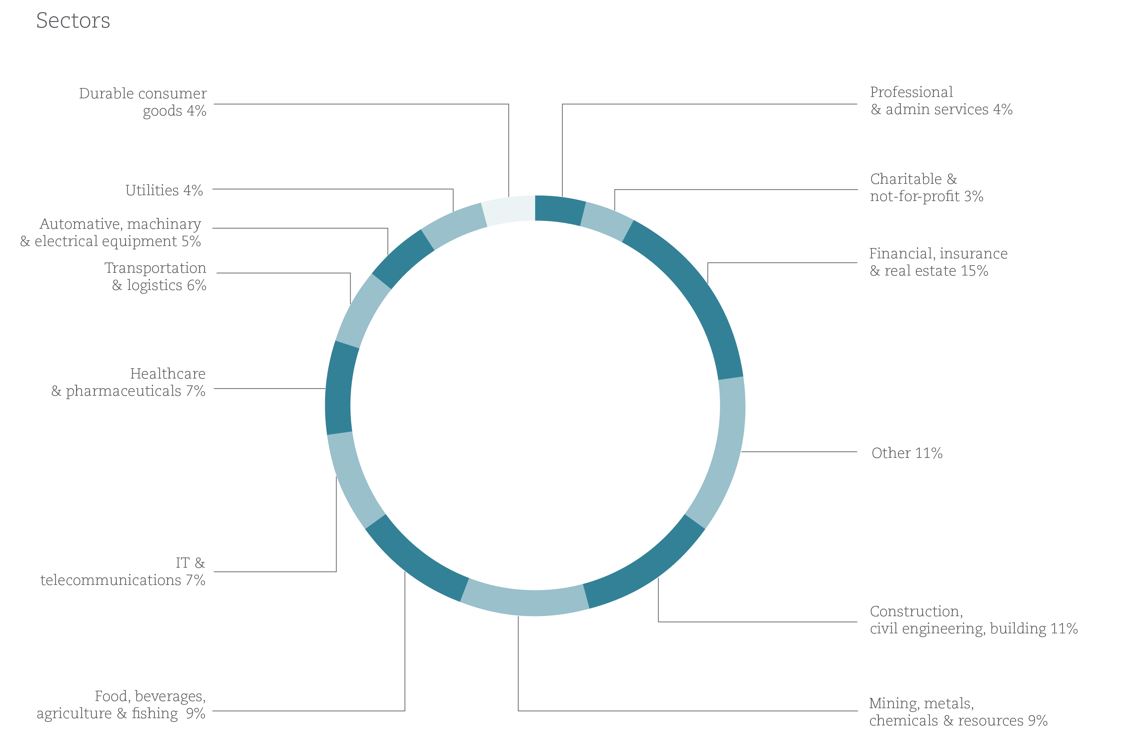 Whilst some other sectors make up a smaller percentage of the reporting population, some of these sectors may actually involve a higher risk of modern slavery. Operators in some of these sectors, such as food and beverages, may be smaller and therefore not captured by the Revenue Threshold. Another issue is that certain industries tend to be in the second, third or even last tier of suppliers to other sectors. Again, these sectors are therefore less likely to be required to take up reporting as part of their own supply chain obligations.

Companies have taken a varied approach to their statements issued for the first modern slavery reporting period. Some organisations have indicated their first step to combatting modern slavery includes performing a supply chain risk assessment, mapping their operational processes, and releasing a supplier questionnaire. Others have begun to evaluate their current practices to identify potential risks of modern slavery.

Areas that were identified for improvement include:

Having reviewed many of the modern slavery statements that have been prepared, we have identified the following common approaches:

Going into the next reporting season, it is essential that entities ensure their compliance with the MSA and consider taking the following steps:

The reporting deadline for the 2021 Modern Slavery Statements is 6 months after the end of the reporting entity’s financial year.

The upcoming reporting due dates to be aware of are:

Given the amount of work involved, and that the expectation for future reporting will be to demonstrate improvements in processes, it is critical to start preparing for next reporting cycle now.

The New South Wales Modern Slavery Act (NSW MSA) was passed by the NSW legislature in June 2018 but is yet to come into force.  The NSW MSA (unlike the Commonwealth MSA) imposes penalties for failing to submit modern slavery statements and also envisages the appointment of an anti-slavery commissioner.

In 2019, the NSW MSA and the Amendment Bill were referred to the NSW Legislative Council’s Standing Committee on Social Issues (the Committee). The Committee undertook an inquiry as to whether the NSW MSA was inconsistent with the Commonwealth MSA. On 25 March 2020, the Committee released a report, including its recommendations to the NSW Government (the Report).

The key recommendations and considerations of the Report were:

Despite the Government’s response, the Amendment Bill is yet to pass into legislation and the NSW Government is yet to announce when the NSW MSA will enter into force.