Can we harness the oceans for a renewable energy future?

Oceans as an asset

Oceans cover more than 70% of the earth’s surface and are a vital resource. The World Wildlife Fund valued the oceans’ assets at $24 trillion, comprising of:

Importantly, oceans are also an asset in combatting climate change by acting as a carbon sink.  Oceans have absorbed a third of all CO2 that humans have emitted into the atmosphere since the beginning of the Industrial Revolution, and by providing renewable sources of energy, including thermal and tidal energies, they provide an alternative to emission heavy fuels.

Oceans as a Carbon Sink

The oceans sequester CO2 from the atmosphere in many ways starting with CO2 from the atmosphere dissolving in the surface waters of the oceans as a result of the difference in the concentration of CO2 in the atmosphere and in the surface waters. Some of the CO2 reacts with seawater, creating carbonic acid, which in turn releases hydrogen ions. These combine with carbonate in seawater to form bicarbonate, a form of carbon which does not easily leave the ocean. Most of the CO2 which is dissolved into the oceans is used in photosynthesis whereby phytoplankton, a plant-like organism, consumes CO2 on a scale equivalent to forests and releases oxygen in its place. Algae also sequester CO2 through photosynthesis. Additionally, many organisms in the oceans use the dissolved CO2 to make calcium carbonate, a building material of shells and skeletons. Some of the  CO2 absorbed by living organisms, such as whales,  is carried down to the ocean bed when the organisms die where they form layers of carbon-rich sediment (which may over time turn into rocks) while most is transferred to other creatures when they are consumed.

Oceans as an  Energy Generator

Estimates suggest that tropical ocean waters absorb solar energy equivalent to the heat content of 250 billion barrels of oil per day. Extracting this heat would enable millions of megawatts of electricity to be produced continuously and free from GHG emissions- OTEC is a ‘game changer’.

OTEC relies on the variance in temperature between warm ocean water near the surface, heated by the sun, and cold water below the surface, at depths of 800 to 1,000 meters, with an optimum temperature variance between 20 to 25 °C or more. The process involves warm seawater from the ocean surface vaporising an intermediate fuel with a low boiling point, such as ammonia, to a gas which passes through a turbine turning a generator to make electricity. The colder water then condenses the fuel back to liquid form, creating a vacuum that forces the fuel to circulate and allows it to be reused (see the diagram below). Although this technology  is still in the early stages, it has been estimated that the energy within these thermal gradients has a potential of nearly 10,000 times that of tidal and wave energy combined. Other applications of OTEC technology extend to air conditioning and the production of hydrogen for fuel cells. 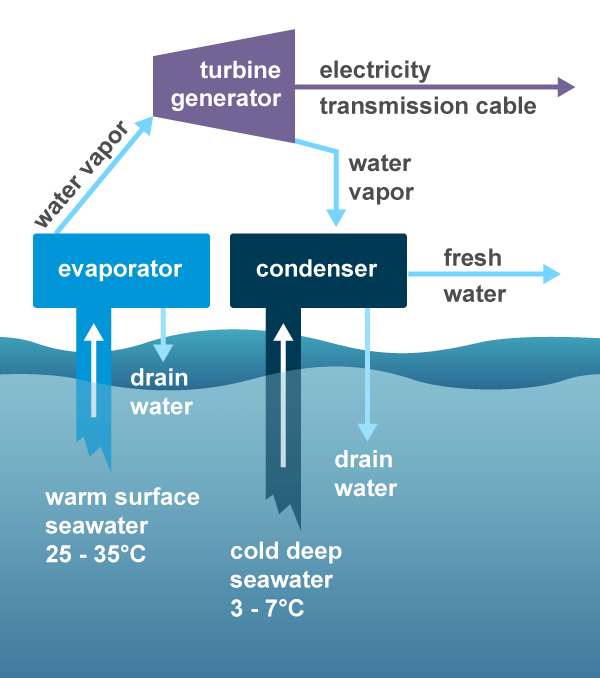 Tidal energy is produced by the surge of ocean waters during the rise and fall of tides. If water is forced through narrow passages (such as tidal streams) or around headlands, it speeds up aided by the ebb and flow of the tide. By placing turbines into such passages, the pressure from the flow of fluid is turned into energy in much the same way as  wind turbines make energy.  If the turbines are correctly placed, the impact on the environment of  such technology is limited. Although tidal energy can also be harvested using dams and man-made lagoons, there is a significant environmental impact in doing it this way. The world’s most powerful tidal turbine, Orbital O2, has been commissioned at the Port of Dundee in Scotland, and when operational, will produce enough electricity to power 2000 homes and offset 2,200 tonnes of CO2 per year.

Economics play a crucial role in the development and viability of ocean technologies. OTEC and tidal energy production are both   in their  infancy neither having been tested on a wide-scale commercial basis. Recently, Allseas, a subsea construction company, acquired an OTEC specialist, Bluerise. Allseas’ rationale for the acquisition was to bring the OTEC concept to the market, which could pave the way for more private sector funding. The Orbital O2 turbine has been promoted   as a ‘proof of concept’ technology – the success of this project, both in energy production and commercial viability, will set the tone for future projects. Only time will indicate whether such technologies are commercially viable.

United Nations Convention on the Law of the Sea (‘UNCLOS’).

One key question is where can ocean technologies be sited and who has authority over them. UNCLOS divides the sea into different zones, which include, but are not limited to,  internal waters, the continental shelf and high seas. Each coastal state can exercise sovereignty over their internal waters and continental shelf. Coastal states also have certain “sovereignty rights” in their exclusive economic zone (EEZ), the sea lying beyond and adjacent to the territorial sea and extending to a maximum of 200 nautical miles. These rights cover  natural resources and apply with regard to “other activities for the economic exploitation and exploration of the zone, such as the production of energy from the water, currents and winds” (Art. 56(1)(a) UNCLOS). The high seas are not subject to the sovereignty of any state. It is , therefore, open to a coastal state to authorise development in its continental shelf and its EEZ.

OTEC facilities can either be land based, in close proximity to the sea, or floating platforms. There are   some legal risks associated with offshore facilities that will need to be addressed.   Floating OTEC facilities could be considered “floating islands” under Article 60 of UNCLOS. If so, the relevant coastal state will need to rely on the sovereign rights conferred on it in its  EEZ to establish its right to licence the siting and operation of the facility.  There is a potential for disputes between coastal states as to the boundaries of their respective EEZs. Such disputes could not only affect the legal right to licence construction and operation of  OTEC facilities  but also the right  to lay submarine cables from offshore  facilities to shore.

This legal risk is compounded for investors as only state signatories to UNCLOS can enforce its  provisions. Coastal states will need to be flexible and cooperate if OTEC is going to be widely adopted.

Technological advancements in the offshore oil industry have the potential to allow the reuse of aging rigs as floating OTEC platforms. These can be located anywhere above deep water as long as they can be easily moored, and have power cables which can reach a land-based power grid for electricity generation. This could resolve the issues involved in decommissioning such platforms while providing a ready made “base” from which to construct the OTEC facilities.

There are, however, a number of risks in using pre-existing platforms. Oil companies in many jurisdictions have residual liability for their offshore oil platforms and would need to be assured that they had no further liability for  a decommissioned rig once it has been converted by another operator to another use.  There may be construction risk where the conversion of the rig to an OTEC platform encounters  design or other defects arising from an aging asset. This could in turn impact on the availability of insurance coverage. Given that both the conversion of an oil rig to an OTEC platform and OTEC as a technology are novel , insurers may be reluctant to provide cover for this new technology. There is  also the  risk that  bottom trawling  during construction and operation could damage third party underground cables. This  will need to be managed through the creation of exclusion zones around the platform.  The creation of cross-sector  planning bodies involving all affected industries including construction, energy and fishing will be critical to the success of OTEC facilities.

Oceans as a Vital Asset

There are a number of barriers to harnessing the oceans’ true potential. Thermal and tidal energy technologies, while promising, are still in their infancy and  it will take  time to develop such technologies on a commercial scale and to grapple with the legal issues they  raise.

Although the impact of climate change on warming the oceans  limits their  function as a carbon sink, there is great potential for the oceans to provide for our future energy needs and so contribute to reducing carbon emissions. As a result the oceans will retain their role as an invaluable asset.

Clare Hatcher is co-facilitating an Energy hackathon with Richard Power (Clyde & Co), The Chancery Lane Project and Latham & Watkins, which will focus on, among other things, the promotion of renewable energy and fuels of the future. The first session will take place on 21 May at 13:00 GMT. If you are interested in participating, please sign up here:  https://bit.ly/3bhlx2S